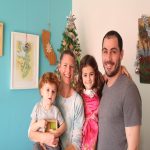 Lindsey grew up in Southern California near Thousand Oaks. She studied to become a math teacher and served at Pottersfield Ranch in Montana for 2 years and then at Calvary Chapel Cyprus (island below Turkey) for 1 year. She had never been to France before meeting Tonio but now speaks beautiful French and is on her way to becoming a French citizen.

Tonio is half-French, half-American, born in Seattle but living in France since 1992. He grew up in France as a missionary/pastor’s kid. He studied computer science in the French university system. He has been working full-time for the church in Nice since 2009.

Tonio & Lindsey got married in October 2010 after meeting at Schloss Herolddeck Conference Center in Austria in August 2009.

Tonio is the senior pastor at Calvary Chapel Nice. He received the leadership of the church in June 2019 after assisting his father for 10 years. This transition is recent and there is still a lot of work associated with this change.

Tonio serves by teaching the Bible, discipling, handling the administration/paperwork, the communication/web presence, the building maintenance, and leading worship.

Lindsey leads worship and is part of the women’s ministry. She also handles our kids, Daphné and Django, with joy.

Tonio and Lindsey want to be faithful to Jesus, feed the flock here, train and raise up leaders in the church.