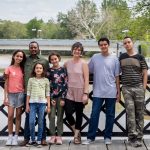 Argaw and Rachel Ayele have been serving in Hawassa, Ethiopia since January 2006. Since then, they’ve had five children: Adonijah, Elias, Genesis, Gracie and Stella. They started a locally licensed non-governmental organization called Ebenezer Supporting and Development Association (ESDA). ESDA’s focus is to serve those in desperate situations. Through ESDA they have started a few children’s homes. Ebenezer Grace Children’s Home was started in January 2010. Lantu’s Home, which is a home that exists to help children needing specialized care, was started in October 2015. And in 2017, ESDA also took on a third children’s home called House of Hope, that currently houses the older boys, many of which have HIV. Other projects through ESDA include family support, educational support, and a school feeding project. Through these different ministries, the Ayeles aim to fulfill God’s call on their life by sharing the love of Christ to the people of Ethiopia.